Sandviken is the municipality with the largest number of hydrogen cars per capita in the world. This is also where Sweden’s fourth hydrogen refueling station was opened in 2016. Today, there are five stations in Sweden: Stockholm, Göteborg, Sandviken, Mariestad och Umeå.

In Sandviken, you can safely refuel your hydrogen car and be assured that it only emits water, so clean that you can drink it. 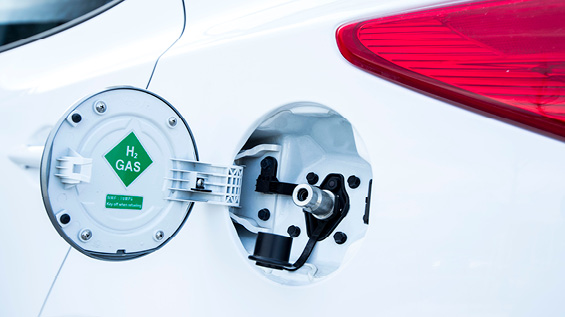 Energy from renewable energy sources is stored with hydrogen

Storage of electricity has long been a big challenge for producers of renewable energy sources, such as solar and wind. Hydrogen is a good solution. By producing hydrogen through electrolysis, green electricity can be stored for usage at a later time.

Transforming hydrogen to energy requires a fuel cell, which can be used in cars and heavy lorries, and also as stationary units for heat and electricity. The only emissions are water and heat. Sandvik manufactures the coated strips that are at the core of the fuel cells (materials.sandvik).

Collaboration between the municipality and the industry

Are you considering a hydrogen fuel cell car? Contact us at kommun@sandviken.se and we’ll be happy to tell you more.

You recognize the hydrogen cars from the Sandviken PurePOWER logo. The cars are owned and used by:

The municipality also has a number of electrical cars in its fleet.

Sandviken was the first municipality in Sweden to introduce hydrogen buses in city traffic. As they are quiet and only emit water, they are ideal in city traffic where a lot of people are moving around. Did you know that a hydrogen bus cleans approximately 12 cubic meter air per kilometer?

Many projects are underway around the world to extend the knowledge and infrastructure around fuel cells and hydrogen. Countries, such as China, Korea, Japan, the United States, Canada, the United Kingdom, France, Denmark, Norway, Germany and the Netherlands, are pushing the trend hard and in 2018, 25 European countries signed a declaration on a joint investment in hydrogen and fuel cell technology.

A roadmap for hydrogen and fuel cells is under developement in Sweden. Fossilfritt Sverige has been commissioned by the government to provide directives on how to become independent of fossil fuels, solve the energy issue and the climate challenge.

Find out more about hydrogen (vatgas.se)

When wise people from all over the world in industry, academia and the public sector interact exciting things happen. Sandviken is such a place in the field of fossil free and climate neutral energy.

Sandviken PurePOWER is an open communication concept administered by Sandvikens Kommun. Here, people that want to contribute to making Sweden one of the world’s first fossil free countries meet. Sandviken is the place where it all happens. Right now.